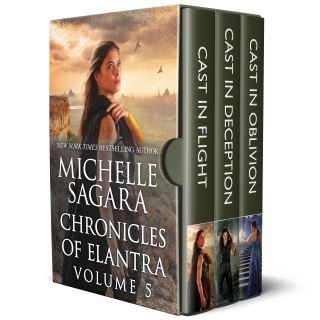 Now available in a box set! The latest adventures of Private Kaylin Neya, only from New York Times bestselling author Michelle Sagara. Plunge into the fantastical city of Elantra, where magic and adventure ensure that life is never boring.

Private Kaylin Neya already has Dragons and Barrani as roommates. Adding one injured, flightless Aerian to her household should be trivial. But when a walk to the Halls of Law becomes a street-shattering magical assassination attempt, Kaylin discovers that it’s not the guest who’s going to be the problem: it’s all the people who suddenly want Moran dar Carafel dead. And though Moran refuses to tell her why she’s being targeted, Kaylin is determined to discover her secret and protect her at all costs—even if keeping Moran safe means dealing with Aerian politics, angry dragons and something far more sinister.

When one of Kaylin’s housemates, Annarion, decides to undertake the Barrani Test of Name, his friends refuse to let him face his task alone—and Kaylin’s sentient home, Helen, is the only structure capable of shielding the rest of Elantra from the magnitude of their power. Annarion and Mandoran almost caused the destruction of the High Halls once already. Add nine of their closest friends, and the danger is astronomically higher—especially since these guests are at the heart of a political firestorm. As tensions ramp up, the shadows beneath the High Halls are seeking a freedom that has never been possible before. Kaylin must find a way to keep those shadows from escaping, or that freedom will destroy her city, the empire and everything she holds dear.

Kaylin’s mission the West March might just start a war. She traveled with a Dragon, and her presence is perceived as an act of aggression in the extremely hostile world of Barrani-Dragon politics. A private Barrani Hell, built of Shadow and malice, exists beneath the High Halls. It is the High Court’s duty to jail the creature at its heart—even if it means that Barrani victims are locked in the cage with it. The Consort is willing to do almost anything to free the trapped and end their eternal torment. And she needs the help of Kaylin’s houseguests—and Kaylin herself. Failure won’t be death—it will be Hell. And that’s where Kaylin is going.