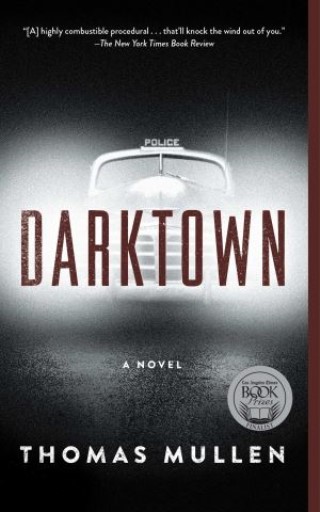 “One incendiary image ignites the next in this highly combustible procedural…written with a ferocious passion that’ll knock the wind out of you.” —The New York Times Book Review

“Fine Southern storytelling meets hard-boiled crime in a tale that connects an overlooked chapter of history to our own continuing struggles with race today.” —Charles Frazier, bestselling author of Cold Mountain

“This page-turner reads like the best of James Ellroy.” —Publishers Weekly, starred review

“In the way the story is told coupled with its heightened racial context, Darktown reminded me of Walter Mosley or a George Pelecanos novel.” —Milwaukee Journal Sentinel

“High-quality…crime fiction with a nimble sense of history…quick on its feet and vividly drawn.” —Dallas Morning News

“Some books educate, some books entertain, Thomas Mullen’s Darktown is the rare book that does both.” —Huffington Post

Award-winning author Thomas Mullen is a “wonderful architect of intersecting plotlines and unexpected answers”(The Washington Post) in this timely and provocative mystery and brilliant exploration of race, law enforcement, and justice in 1940s Atlanta.

Responding to orders from on high, the Atlanta Police Department is forced to hire its first black officers, including war veterans Lucius Boggs and Tommy Smith. The newly minted policemen are met with deep hostility by their white peers; they aren’t allowed to arrest white suspects, drive squad cars, or set foot in the police headquarters.

When a woman who was last seen in a car driven by a white man turns up dead, Boggs and Smith suspect white cops are behind it. Their investigation sets them up against a brutal cop, Dunlow, who has long run the neighborhood as his own, and his partner, Rakestraw, a young progressive who may or may not be willing to make allies across color lines. Among shady moonshiners, duplicitous madams, crooked lawmen, and the constant restrictions of Jim Crow, Boggs and Smith will risk their new jobs, and their lives, while navigating a dangerous world—a world on the cusp of great change.

A vivid, smart, intricately plotted crime saga that explores the timely issues of race, law enforcement, and the uneven scales of justice.

Thomas Mullen: Thomas Mullen is the author of The Lightning Men, Darktown, and The Last Town on Earth, which was named Best Debut Novel of 2006 by USA TODAY. He was also awarded the James Fenimore Cooper Prize for excellence in historical fiction for The Many Deaths of the Firefly Brothers and The Revisionists. His works have been named to Year’s Best lists by The Chicago Tribune and USA TODAY, among others. His stories and essays have been published in Grantland, Paste, and the Huffington Post, and his Atlanta Magazine true crime story about a novelist/con man won the City and Regional Magazine Award for Best Feature. He lives in Atlanta with his wife and sons.