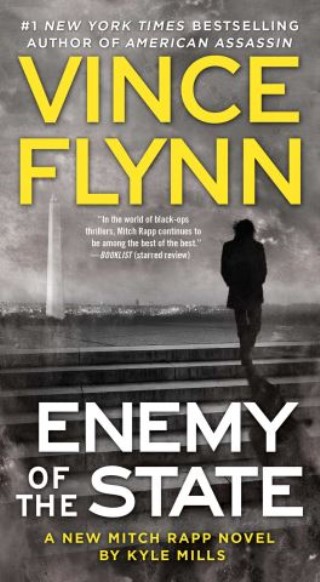 Enemy of the State

“In the world of black-op thrillers, Mitch Rapp continues to be among the best of the best” (Booklist, starred review), and he returns in Vince Flynn’s #1 New York Times bestselling series alone and targeted by a country that is supposed to be one of America’s closest allies.

After 9/11, the United States made one of the most secretive and dangerous deals in its history. The evidence against the powerful Saudis who coordinated the attack would be buried. In return, King Faisal would promise to keep the oil flowing and deal with the conspirators in his midst.

When the king’s own nephew is discovered funding ISIS, the President—furious but unable to take action against the Saudis—gives Rapp his next mission: he must find out more about which high-level Saudis are involved in the scheme and kill them. The catch? Rapp will get no support from the United States.

Forced to make a decision that will change his life forever, Rapp quits the CIA and assembles a group of independent contractors to help him complete the mission. They’ve barely begun unraveling the connections between the Saudi government and ISIS when the brilliant new head of the intelligence directorate discovers their efforts. With Rapp getting too close, he threatens to go public with the details of the post-9/11 agreement between the two countries. Facing an international incident that could end his political career, the President orders America’s intelligence agencies to join the Saudis’ effort to hunt the former CIA man down.

Rapp, supported only by a team of mercenaries with dubious allegiances, finds himself at the center of the most elaborate manhunt in history. It’s only a matter of time before he’s caught or killed. Will it be enough to turn the tables on the Saudis and clear his name?

Vince Flynn: #1 New York Times bestselling author Vince Flynn (1966–2013) created one of contemporary fiction’s most popular heroes: CIA counterterrorist agent Mitch Rapp, featured in thirteen of Flynn’s acclaimed political thrillers. All of his novels are New York Times bestsellers, including his stand-alone debut novel, Term Limits.Kyle Mills is the #1 New York Times bestselling author of nineteen political thrillers, including Red War for Vince Flynn and The Patriot Attack for Robert Ludlum. He initially found inspiration from his father, the former director of Interpol, and still draws on his contacts in the intelligence community to give his books such realism. Avid outdoor athletes, he and his wife have lived in Jackson Hole, Wyoming, for over twenty years. Visit his website at KyleMills.com.