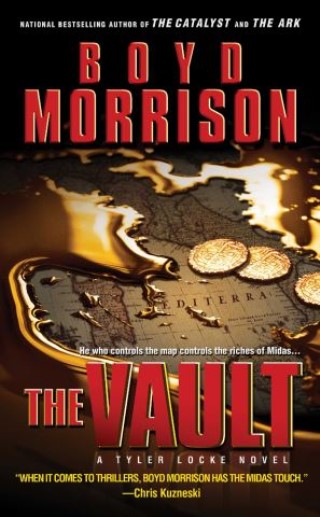 National bestselling author Boyd Morrison brings back Tyler Locke, who must race to stop a terrorist cell that has stolen an ancient text related to the tale of King Midas in this, “heart-thumping ride…not to be missed” (Steve Berry).

Tyler Locke’s routine commute on a Washington State ferry is interrupted by a chilling anonymous call: his father has been kidnapped, and a truck bomb is set to detonate on board in twenty minutes. When Tyler reaches the bomb on the boat’s car deck, he’s stunned to find classical languages expert Stacy Benedict waiting for him. She’s received the same threat, and her sister has also been taken.

In order to disarm the bomb, Tyler and Stacy must work together to solve an engineering puzzle—a puzzle written in ancient Greek. But preventing the explosion is only the first step; they soon learn the entire setup is a test created by a ruthless criminal who forces them to go on a seemingly impossible mission: uncover the legendary lost riches of King Midas.

Tyler and Stacy have just five days to track down the gold. Armed with an ancient manuscript penned by brilliant Greek inventor Archimedes, they begin a quest to unravel a two-thousand-year-old mystery whose answer is hidden within the workings of a cryptic artifact: the Antikythera Mechanism, a device designed by Archimedes himself. To save their loved ones and prevent their captors from recovering a treasure that will finance unspeakable devastation, the two scramble to Italy, Germany, Greece, and finally to the streets of New York City in a race against the clock to find the truth behind the story of King Midas.

The Vault combines an explosive premise and blistering pace with a fascinating exploration of one of history’s most intriguing inventors and a brilliant reimagining of an ancient legend.

Boyd Morrison: Boyd Morrison has a Ph.D. in industrial engineering and has worked for NASA, Microsoft’s Xbox Games Group, and Thomson-RCA. In 2003, he fulfilled a lifelong dream and became a Jeopardy! champion. He is also a professional actor who has appeared in commercials, stage plays, and films. He lives with his wife in Seattle.