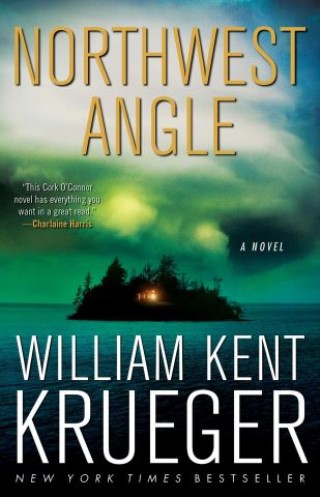 With his family caught in the crosshairs of a group of brutal killers, detective Cork O’Connor must solve the murder of a young girl in the latest installment of William Kent Krueger’s unforgettable New York Times bestselling series.

During a houseboat vacation on the remote Lake of the Woods, a violent gale sweeps through unexpectedly, stranding Cork and his daughter, Jenny, on a devastated island where the wind has ushered in a force far darker and more deadly than any storm.

Amid the wreckage, Cork and Jenny discover an old trapper’s cabin where they find the body of a teenage girl. She wasn’t killed by the storm, however; she’d been bound and tortured before she died. Whimpering sounds coming from outside the cabin lead them to a tangle of branches toppled by the vicious winds. Underneath the debris, they find a baby boy, hungry and dehydrated, but still very much alive. Powerful forces intent on securing the child pursue them to the isolated Northwest Angle, where it’s impossible to tell who among the residents is in league with the devil. Cork understands that to save his family he must solve the puzzle of this mysterious child whom death follows like a shadow.

William Kent Krueger: William Kent Krueger is the award-winning author of the New York Times bestselling Ordinary Grace, winner of the Edgar Award for best novel, as well as eighteen Cork O’Connor novels, including Desolation Mountain and Sulfur Springs. He lives in the Twin Cities with his family. Visit his website at WilliamKentKrueger.com.