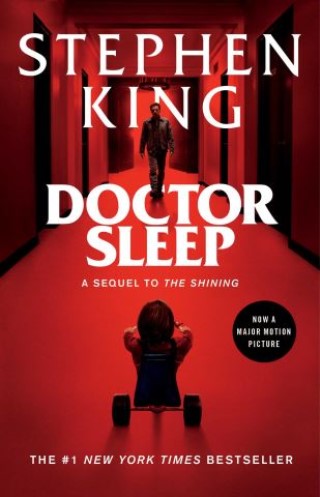 From master storyteller Stephen King, his unforgettable and terrifying sequel to The Shining—an instant #1 New York Times bestseller that is “[a] vivid frightscape” (The New York Times).

Years ago, the haunting of the Overlook Hotel nearly broke young Dan Torrance’s sanity, as his paranormal gift known as “the shining” opened a door straight into hell. And even though Dan is all grown up, the ghosts of the Overlook—and his father’s legacy of alcoholism and violence—kept him drifting aimlessly for most of his life. Now, Dan has finally found some order in the chaos by working in a local hospice, earning the nickname “Doctor Sleep” by secretly using his special abilities to comfort the dying and prepare them for the afterlife. But when he unexpectedly meets twelve-year-old Abra Stone—who possesses an even more powerful manifestation of the shining—the two find their lives in sudden jeopardy at the hands of the ageless and murderous nomadic tribe known as the True Knot, reigniting Dan’s own demons and summoning him to battle for this young girl’s soul and survival...

Stephen King: Stephen King is the author of more than sixty books, all of them worldwide bestsellers. His recent work includes The Institute, Elevation, The Outsider, Sleeping Beauties (cowritten with his son Owen King), and the Bill Hodges trilogy: End of Watch, Finders Keepers, and Mr. Mercedes (an Edgar Award winner for Best Novel and an AT&T Audience Network original television series). His novel 11/22/63 was named a top ten book of 2011 by The New York Times Book Review and won the Los Angeles Times Book Prize for Mystery/Thriller. His epic works The Dark Tower, It, Pet Sematary, and Doctor Sleep are the basis for major motion pictures, with It now the highest grossing horror film of all time. He is the recipient of the 2018 PEN America Literary Service Award, the 2014 National Medal of Arts, and the 2003 National Book Foundation Medal for Distinguished Contribution to American Letters. He lives in Bangor, Maine, with his wife, novelist Tabitha King.