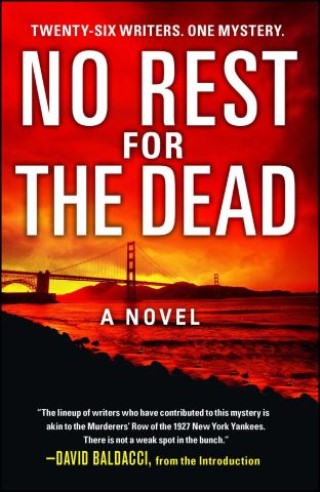 No Rest for the Dead

“The lineup of writers who have contributed to this mystery is akin to the Murderers’ Row of the 1927 New York Yankees. There is not a weak spot in the bunch.” —David Baldacci, from the Introduction

Alexander McCall Smith. Sandra Brown. Faye Kellerman. J.A. Jance. Jeffery Deaver. Kathy Reichs. Lisa Scottoline. Jeff Lindsay. These are only a handful of the names that make up the all-star lineup of authors behind No Rest for the Dead, a tale of vengeance, greed, and love that flows seamlessly, in the words of David Baldacci, “as it passes from one creator’s mind to the next.”

When Christopher Thomas, a ruthless curator at San Francisco’s McFall Art Museum, is murdered and his decaying body is found in an iron maiden in a Berlin museum, his wife, Rosemary, is the primary suspect, and she is tried, convicted, and executed. Ten years later, Jon Nunn, the detective who cracked the case, is convinced that the wrong person was put to death. In the years since the case was closed, he’s discovered a web of deceit and betrayal surrounding the Thomases that could implicate any number of people in the crime. With the help of the dead woman’s friend, he plans to gather everyone who was there the night Christopher died and finally uncover the truth, suspect by suspect. Solving this case may be Nunn’s last chance for redemption…but the shadowy forces behind Christopher’s death will stop at nothing to silence the past forever.

In this innovative storytelling approach, each of these twenty-five bestselling writers brings their distinctive voice to a chapter of the narrative, building the tension to a shocking, explosive finale. No Rest for the Dead is a thrilling, page-turning accomplishment that only America’s very best authors could achieve.

David Baldacci: David Baldacci is a worldwide bestselling novelist. With his books published in over 45 languages and in more than 80 countries, and with over 110 million copies in print, he is one of the world's favorite storytellers. David Baldacci is also the cofounder, along with his wife, of the Wish You Well Foundation, a nonprofit organization dedicated to supporting literacy efforts across America. Still a resident of his native Virginia, he invites you to visit him at www.DavidBaldacci.com, and his foundation at www.WishYouWellFoundation.org, and to look into its program to spread books across America at www.FeedingBodyandMind.com.Sandra Brown is the author of seventy-one New York Times bestsellers. Brown began her writing career in 1981 and since then has published over seventy novels, most of which remain in print. Sandra and her husband, Michael Brown, live in Arlington, Texas.R.L. Stine invented the teen horror genre with Fear Street, the bestselling teen horror series of all time. He also changed the face of children’s publishing with the mega-successful Goosebumps series, which went on to become a worldwide multimedia phenomenon. Guinness World Records cites Stine as the most prolific author of children’s horror fiction novels. He lives in New York City with his wife, Jane, and their dog, Nadine.Jeffery Deaver is the #1 international bestselling author of more than forty novels, three collections of short stories, and a nonfiction law book. His books are sold in 150 countries and translated into 25 languages. His first novel featuring Lincoln Rhyme, The Bone Collector, was made into a major motion picture starring Denzel Washington and Angelina Jolie, which is currently being adapted for television by NBC.