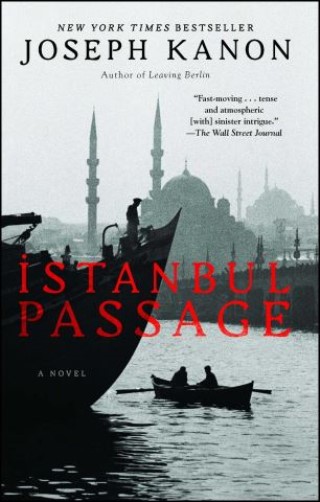 In the bestselling tradition of espionage novels by John LeCarre and Alan Furst, Istanbul Passage brilliantly illustrates why Edgar Award–winning author Joseph Kanon has been hailed as "the heir apparent to Graham Greene" (The Boston Globe).

Istanbul survived the Second World War as a magnet for refugees and spies. Even expatriate American Leon Bauer was drawn into this shadow world, doing undercover odd jobs in support of the Allied war effort. Now as the espionage community begins to pack up and an apprehensive city prepares for the grim realities of postwar life, Leon is given one last routine assignment. But when the job goes fatally wrong—an exchange of gunfire, a body left in the street, and a potential war criminal on his hands—Leon is trapped in a tangle of shifting loyalties and moral uncertainty.

Played out against the bazaars and mosques and faded mansions of this knowing, ancient Ottoman city, Istanbul Passage is the unforgettable story of a man swept up in the dawn of the Cold War, of an unexpected love affair, and of a city as deceptive as the calm surface waters of the Bosphorus that divides it.

Joseph Kanon: Joseph Kanon is the Edgar Award–winning author of The Accomplice, Defectors, Leaving Berlin, Istanbul Passage, Los Alamos, The Prodigal Spy, Alibi, Stardust, and The Good German, which was made into a major motion picture starring George Clooney and Cate Blanchett. He lives in New York City.