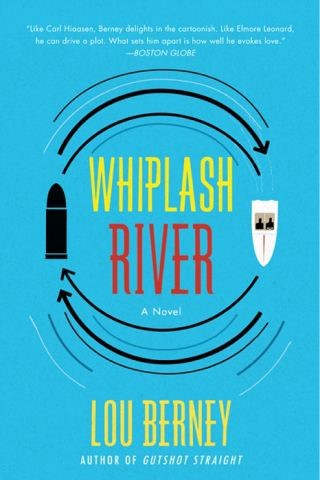 “Like Carl Hiaasen, Berney delights in the cartoonish. Like Elmore Leonard, he can drive a plot. What sets him apart is how well he evokes love, making the romance…as compelling as the mystery.”
—Boston Globe

Lou Berney immediately earned a seat of honor at the mystery masters’ table with his crackling caper novel, Gutshot Straight—a lightning-fast, fiendishly clever suspenser that screamed for a sequel. And here it is. Former professional wheel man Charles “Shake” Bouchon is back, living in the Caribbean paradise of Belize with his lawless past far behind him—until a gunshot tears through his beachside restaurant and he’s on the run again. A twisting tale filled with lawmen, con men, and  hit men; a beautiful but deadly FBI agent; and a murderous thug named Baby Jesus, Whiplash River recalls the best of the off-the-wall crime fiction impresarios—Elmore Leonard, Carl Hiaasen, James W. Hall, Robert Ferrigno, Tim Dorsey—while establishing its own unique orbit in the noir universe.

Lou Berney is the author of three previous novels, Gutshot Straight, Whiplash River, and multiple prize-winning The Long and Faraway Gone. His short fiction has appeared in publications such as The New Yorker, Ploughshares, and the Pushcart Prize anthology. He teaches at the University of Oklahoma and in the Red Earth MFA program at Oklahoma City University. He lives in Oklahoma City, Oklahoma.