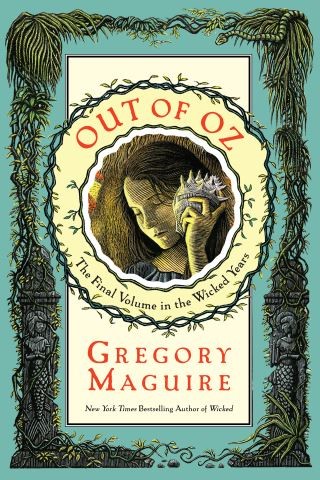 The Final Volume in the Wicked Years

“Maguire’s work is melodic, symphonic, and beautiful; it is dejected and biting and brave. How great that people flock to these magical novels.”
—Los Angeles Times Book Review

Bestselling author Gregory Maguire’s remarkable series, The Wicked Years, comes full circle with this, his fourth and final excursion across a darker, richer, more complex landscape of “the magical land of Oz.” Out of Oz brilliantly reimagines L. Frank Baum’s world over the rainbow as wracked with social unrest—placing Glinda the good witch under house arrest and having the cowardly Lion on the lam from the law as the Emerald City prepares to make war on Munchkinland. Even Dorothy makes a triumphant return in Maguire’s magnificent Oz finale—tying up every loose green end of the series he began with his classic Wicked, the basis for the smash hit Broadway musical.

Gregory Maguire is the New York Times bestselling author of Confessions of an Ugly Stepsister; Lost; Mirror Mirror; and the Wicked Years, a series that includes Wicked, Son of a Witch, A Lion Among Men, and Out of Oz. Now a beloved classic, Wicked is the basis for a blockbuster Tony Award–winning Broadway musical. Maguire has lectured on art, literature, and culture both at home and abroad. He lives with his family near Boston, Massachusetts.