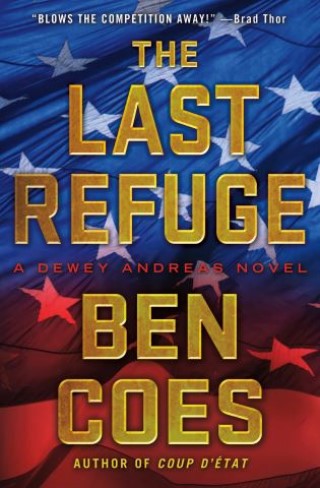 With time running out to stop the nuclear destruction of Tel Aviv, Dewey Andreas must defeat his most fearsome opponent yet.

Off a quiet street in Brooklyn, New York, Israeli Special Forces commander Kohl Meir is captured by operatives of the Iranian secret service, who smuggle Meir back to Iran, where he is imprisoned, tortured, and prepared for a show trial.

What they don't know is that Meir was in New York to recruit Dewey Andreas for a secret operation. Meir had been tipped off that Iran had finally succeeded in building their first nuclear weapon, one they were planning to use to attack Israel. His source was a high-level Iranian government official and his proof was a photo of the bomb itself.

Dewey Andreas, a former Army Ranger and Delta, owes his life to Meir and his team of Israeli commandos. Now, to repay his debt, Dewey has to attempt the impossible ---to both rescue Meir from one of the world's most secure prisons and to find and eliminate Iran's nuclear bomb before it's deployed---all without the help or sanction of Israel or America (at the near certain risk of detection by Iran).

Unfortunately, Dewey's first moves have caught the attention of Abu Paria, the brutal and brilliant head of VEVAK, the Iranian secret service. Now Dewey has to face off against, outwit, and outfight an opponent with equal cunning, skill, and determination, with the fate of millions hanging in the balance.

BEN COES is the author of the critically acclaimed Power Down and Coup d'Etat. He is a former speechwriter for the George H .W. Bush White House, worked for Boone Pickens, was a fellow at the JFK School of Government at Harvard, a campaign manager for Mitt Romney's run for governor in 2002, and is currently a partner in a private equity company out of Boston. He lives in Wellesley, Mass.